February 15, 2021
IN response to  JRS Haward The author uses science to inform his religion. A lot of us converts to orthodoxy who were influenced by Fr. Seraphim Rose use Orthodoxy to inform our science. In the book Genesis, Creation, and Early Man Fr. Seraphim speaks kindly of the certain scientific creationists. This to Mr Haywood is an unpardonable sin. Because some protestant fundamentalists believe in a young earth, apparently anyone who believes in a young earth is a protestant fundamentalist. Fr. Seraphim makes it hard to believe in old earth or evolution and be in harmony with the church fathers. I have never heard any good arguments that any church father or modern saint thinks the earth is old and request for that argument is is met with "you're a protestant fundamentalist."  I am no scholar of the church fathers and not humble enough to repeat the claim of surpassing C.S. Lewis but I understand the until the "Enlightenment" pretty much every Christian thought the eart
Post a Comment
Read more
August 28, 2020
Imagine a wall surrounding a village and the only way to see through it is a pipe. When you look through the pipe you see objects on the other side. The question is how far away are the objects? There are two schools of thought in the village. One group measures how big the objects appear and compare them with the similar objects in the village and say the objects are thus and so distance away.  The other group has a document they claim is from the builder of the tube which says the objects are much closer than the other group because there are "lenses" in the tube which distorts the sizes of the objects. The other group says this is poppycock because nobody can see the lenses and no one even believes the document is real any more. It was just made up. There is another group which believes the document is real and the builder of the wall wrote it, but think the lenses are metaphors which don't really distort the image. While claiming to hold the document and the builder i
Post a Comment
Read more

Thoughts on the age of the Earth

May 15, 2020
There are four miraculous events in the scriptures which render all scientific discussions of the age of the Earth moot. This is because SCIENCE! relies on two assumptions. One is  Uniformitarianism . This requires the laws of nature to be always the same everywhere and all times. The other is gradualism. Things happen gradually over large amounts of time.  The four events in question are Creation, the Fall, the Flood, and the Tower of Babel. Correct me in the comments below if I am wrong, but the current justification for the old age of the universe is radio isotope dating and the properties of light from distant galaxies. I am not a cosmologist but it doesn't really matter for the point I am trying to make. There are critiques of these dating methods but that isn't the point either. The biggest obstacles are the assumptions I mentioned. Lets take a totally Biblical view of the history of the Earth. Try to forget what you know about science or textual criticism and take the st
Post a Comment
Read more 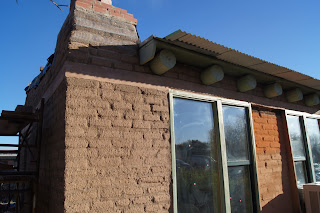 I went to the Vault and Dome training in New Mexico with Solar Adobe. Here are some pictures, I will write more when I get back. I will also clean up the book.
Post a Comment
Read more
More posts